skip to main | skip to sidebar

Our son Chris was going to be married in Old Pensacola. Family members were going to be driving and flying in from as far west as Colorado and as far south as Orlando for the wedding on May 30th. My wife and I wanted to do some things before the reunion got in full swing. One of those things on our list was some kayaking on the Bon Secour River. Until I struck up a friendship on Twitter with one of the owners of Beach'n'River, I had no idea that canoes and kayaks could be rented directly on the river. There are several places to rent in Gulf Shores and Orange Beach, but that is "big water" and though you can get to the creeks and rivers from there, launching a kayak on the river gets you quickly to a part of the Alabama Gulf Coast that very few visitors have an opportunity to see. 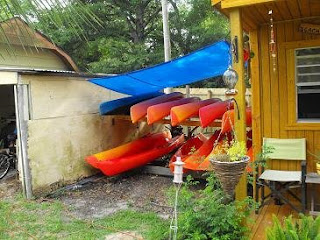 Upon our arrival at Beach'n'River we were greeted by the owners, Jerry and Shelly. We had a nice conversation about the how they got into the business and why they enjoy it so much. Shelly showed us her herb garden and Jerry showed us his roosters. 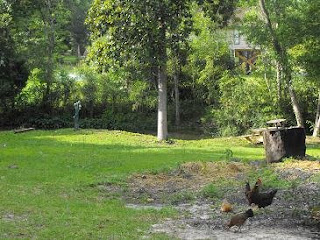 Jerry and Shelly both told us the story behind their vacation rental home, while pointing to it across the creek. We didn't have time on this vacation to stay at the river home rental, but after spending some time on the river neither of us would mind spending a few busy days and quiet nights there. 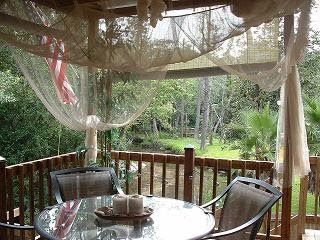 Jerry helped me drag our kayaks a short distance down to the tributary that leads to the Bon Secour River. They told us a few things we might see on different routes. Then we took our shoes off and launched the kayaks. Almost anybody can enjoy kayaking. It only takes seconds to learn the basics and on Bon Secour River all you need to know is the basics. We immediately began seeing beautiful scenery, and after a few minutes I was taking photos. The water was shallow and crystal clear, so we could easily see the white sandy river bottom.

Soon we entered the deeper waters of the river and stopped for a few minutes to watch some kids who were climbing trees to swing into the water from dangling ropes. 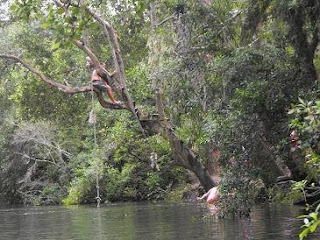 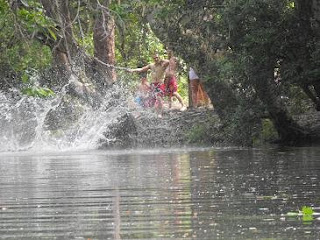 We turned left and followed the river and almost immediate noticed a smell (a nice one). The bank was lined with blooming gardenias. Most likely they were remnants of homes from an earlier time. 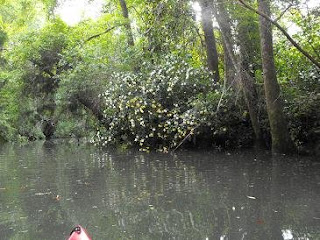 We paddled for close tp thirty minutes down the river, and then we decided to turn around a paddle in the opposite direction towards Bon Secour Bay. Before we got close to the noise of the kids swinging into the water, I spotted a squirrel jumping from limb to limb to cross the creek and watched several turtles slide into the water.

We couldn't look in any direction without seeing beautiful scenery. Flowers, ferns, Southern magnolias, saw palmetto palms, wax myrtles, and yaupon hollies all under a canopy of live oaks was a common scene. 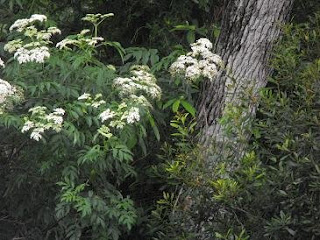 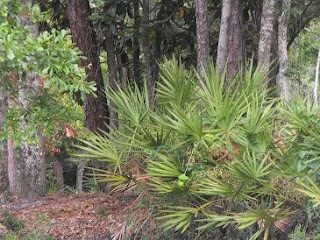 Much of the trip was through wilderness, but in other areas both mansions and rustic retreats were on the waterfront. This Southern mansion sets high and probably dry during even major hurricanes. 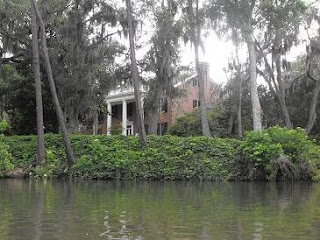 Kudzu covers the steep banks of the river and Spanish moss hangs from the trees on the mansion property. If you take a camera on your trip it is going to be impossible not to pause to snap some photos. 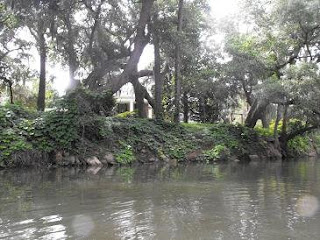 I was usually a few hundred feet in front of Kathy, but every once in awhile I would slow up and let her catch up with me so that we could float side-by-side for awhile. 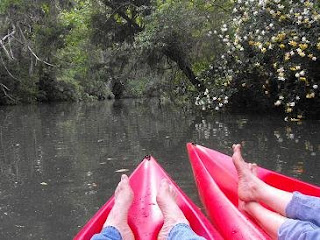 Mallards were common on the river, but this group resting on a log made a particularly nice photo. 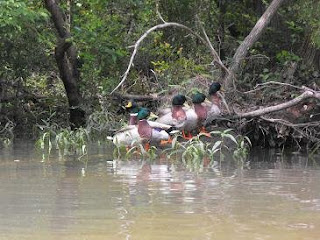 The closer to Bon Secour Bay, the more saltwater fish species mix with freshwater fish. It is possible to catch a largemouth bass on one cast and a redfish on the next. Other freshwater species in the river include, bass, bream, and alligator gar. Other saltwater species include flounder, speckled trout, white trout, and bluefish. 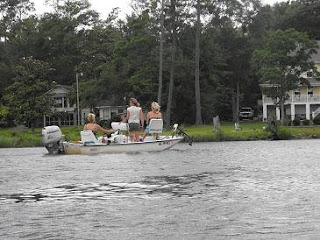 Blue herons are huge birds and are almost always on the river. Blue herons nest together, but away from the nest they are usually solitary birds. 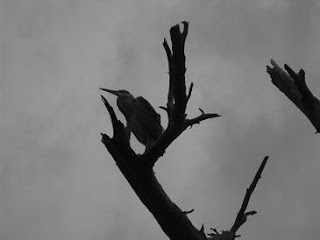 We spotted this small bird on his nest. We thought we were would frighten her while moving closer for a picture, but she remained on the nest even while we were directly under it. 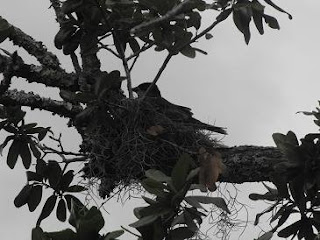 Huge elephant ears are common on the river. 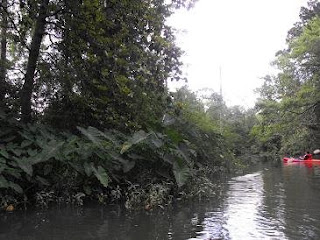 As we got closer to the bay, the boats got bigger. It is possible to dock your boat and have lunch or dinner while kayaking. The Galley is located here and serves that purpose well. 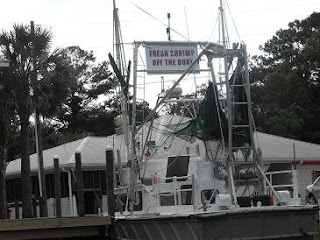 We paddled for about thirty minutes longer. The skies were getting darker, and I knew Kathy wasn't going to paddle into the bay under dark skies and light rain. We turned around and the trip back was as enjoyable as the trip out. If we had have paddled into the bay, we could have more than likely had dolphins swimming very close to us. As close as we were to the water in our kayaks, that would have been a lot of fun.

Upon arriving at Beach'n'River, I pulled the kayaks out of the water. Soon Jerry and Shelly were at the creek bank, asking us if we had a good time. We had a great time. I can honestly recommend kayaking the Bon Secour River, and there is no better place to begin than at Beach'n'River.

For more information on kayaking the Bon Secour River:

Beach'n'River Canoe and Kayak Rentals
Posted by billco at 8:44 AM

We live in Tuscaloosa and vacation in Orange Beach every October -- already got the reservations for this year. You site caught my interest as did a few of the ads which I clicked through looking for things to do -- will return to your site to look for more to do in October.

Thanks a lot Tim. Very pleased that you like what I provide. ... Bill

Thank you Bill and Kathy for visiting and taking the time to kayak with BeachnRiver Kayak Rentals during your recent Gulf Coast stay. Your vivid depiction and details of your float are only topped by the GREAT photos you took. I believe kayaking the Bon Secour river is such a unique experience --- unlike others offered. It is a treasure I love to share. Thank you again for spreading the word!

billco
My wife and I love the outdoors. We fish, hunt arrowheads, hike, and garden. We live on a small lake in Alabama and have a couple thousand acres out our back door to hike. Since moving back here from the Alabama coast, we have gotten very interested in hunting Indian artifacts. We have built a fairly nice collection pretty fast. I spend many hours researching what we find. I like to fish, especially for bluegills and crappie. I enjoy landscaping. We own property in Colorado, so we spend a lot of time in the mountains. Rocky Mountain National Park is our favorite place to visit when we are out west. We also get back to the Alabama Gulf Coast as often as possible. We consider it our second home. I'm also a collector. I have collected about everything at one time or another. I spend a lot of time building websites. In addition to my blogs, I have five static sites.